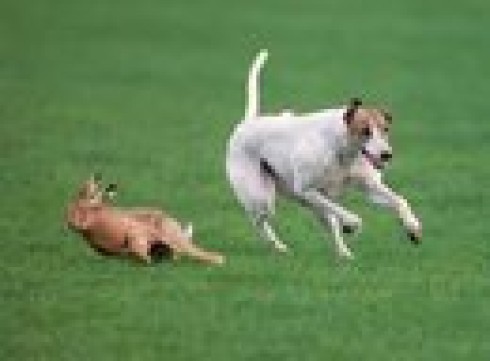 RIP BELLA FIGLIA (02/05/2002 – 07/03/2011)
One of the last remaining great coursing bitches has sadly died. Bella Figlia, a beaten semi-finalist in the (last) 2005 Waterloo Cup, was bred and owned by Ernest Smith and trained by John and Jackie Teal at Malton, then after the Hunting Ban put a stop to coursing under Rules ‘Mitzy’ retired to Tim Pickering and Louise Dale.

By Mounteden Guest out of Bello Regalo (Form Of Tender) – who herself won the Waterloo Plate in 2000 – Bella Figlia won the Earl of Sefton 32 dog stakes in October 2004, beating Chubbys Bear in the final.

She went on to put up a marvellous performance in the Waterloo the following February – in her first course on the Withins she ran for more than two minutes, beating Crafty Lovato, then beat her second round opponent, Stroll To Town, who had only run 68 seconds. The next day at Lidiate she first out coursed Dillrock North, who had started off joint favourite to win – despite the Irish dog having clocked up two minutes less than the gutsy white and brindle bitch – then also saw off Wannabe Adored.  In the semi-finals she was up against another hot favourite, Hardy Admiral, and led him by a length in the run-up but then was seen to slow and he passed her to take the honours – she was later found to have injured a shoulder.
(Hardy Admiral, now living happily in the USA, went on be beaten in the final by Shashi, now living happily in Cambridgeshire!)