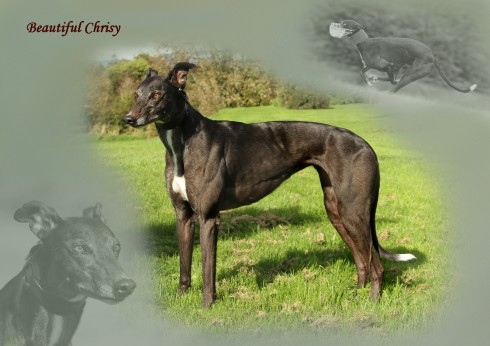 After a fantastic season coursing in Ireland last year, Biggin Hill based owner/trainer Neil Herbert is still stealing the tophies with his fantastic bitch Beautiful Chrisy (Ashmore View – Cudham Perfect) – surely the best coursing bitch in Ireland at the moment!  In many people’s view she was unlucky not to be in the running for Coursing Bitch of the Year – and had injusry not prevented her from taking part in the Grace Bruton, who knows?

She won the All-Aged Bitch Stake at Ballyheigue on the 14/16 October, beating Class Attraction – who was in fact awarded Coursing Bitch of the Year –  in the final. Neil went on to win the Oaks Trial at Crohane on the 23rd October with his Bombshelriapants (Kingsmill Dynamo – Hollyoaks).

Both bitches were bred by the British-owned Hollyoaks Stud.