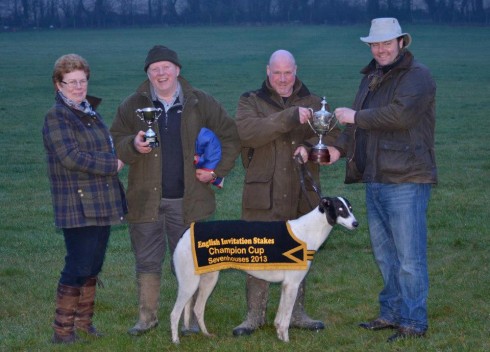 Sevenhouses Coursing Club again hosted the AICC Championship at their January meeting. The dogs competing in the Championship earned their places by qualifying at either Trim, Balbriggan, Carlow or Bandon & Carey’s Cross, earlier in the season.The Championship was won in fine style by British-bred Tricky Chuggy (Im Tricky – Local Lady), bred and trained by Robert Holt and owned by him with Charlie Lister. Runner-up was Sir Mark Prescott’s Pay Me, (Bexhill Eoin – Uptown Smurf), trained by Cliff Standing. The British coursing enthusiasts owe a big debt of gratitude to our Irish friends from all five of the Clubs, who welcomed us and our dogs so enthusiastically and were such marvellous hosts!  (Photo: Patrick Hawkins)