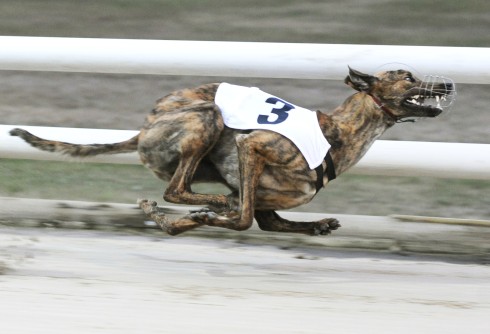 Congratulations to the British Bred dogs – and their connections – who featured in the GBGB Annual Awards – especially JIMMY LOLLIE (pic) who was crowned GREYHOUND OF THE YEAR 2010, as well as Best Sprinter and Best British Bred! Awarded Sprinter of the Year last year too, this brindle Aug ’07 son of World Class – Droopys Kara, bred by K Roberts, owned by Peter Reed & Steve Gamblin and trained by Seamus Cahill, equalled the record for open race wins in a year (37)! (Pic Steve Nash)
MIDWAY SKIPPER, the Chalkley bred and owned bitch who this time last year won Best British Bred, Best Bitch Greyhound and Marathon Performer, was awarded the Marathon Performer crown for another year! A blue and white bitch, she is a May ’06 daughter of Top Honcho – Midway Tomsscout.
Williamhill.com Grand National winner PLANE DADDY was awarded Hurdler of the Year. This black Oct ’06 son of Big Daddy Cool – Lordsbury Knows was bred by the late John Davidson and trained by his daughter Gemma for owner Chris Sliney. Another great performance by a British-bred dog!
It was also great to see Ricky Holloway and the Save Our Stow gang winning the Harry Lloyd Trophy for Services to Greyhound Racing! They are doing a great job – let’s hope 2011 is the year it all happens for them!