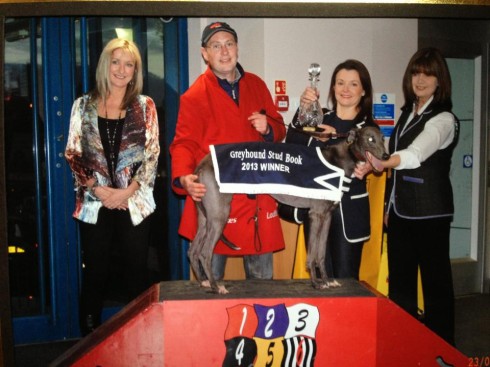 Congratulations to connections of BENKAAT BLUE, winner of the 2013 TruFrame Greyhound Stud Book Trophy at Monmore Green on Thursday 23 May! Mrs Nicola Firmager of sponsors TruFrame Ltd is here presenting the Trophy to Gary Crathern, representing Mark Wallis who trains Benkaat Blue (formerly named Mountjoy Falcon) for owner Mr D Daley of Ipswich. ‘Falcon’ as he is known at the kennels, was bred by Deborah Mullins at her Capel St Mary, Suffolk, Dillymore Kennels: he is an April 2010 dog, by Droopys Scolari out of Mr P Canavan’s Star of Dromin. With enormous thanks to our sponsors TruFrame Ltd!

The full lineup in the Final was as follows:

2 CRASTER KIPPER: bk w dog, whelped 01/05/2011, bred by the Littlefairs at Hartlepool by Crash out of Poolie Pride.  Trained  by Harry Williams and owned by him with Ian Lavery MP (Wansbeck) and Joss Barnfather.

3 FOZZIE ONEDOG: bk dog, whelped 29/06/2010, by Advantage Johnny out of Icemaid Lilley. Owned and trained by Pam Burford and bred by her and husband Lance at Womborne.